A case in Due Diligence – Nikola Corporation 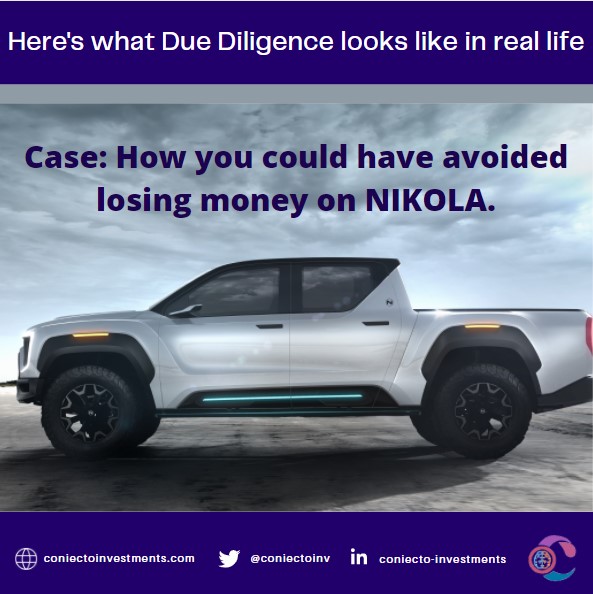 A case in Due Diligence – Nikola Corporation

Not every Nikola is a Tesla, pun intended.

The Securities & Exchange Commission (SEC) is investigating Nikola Corporation for fraud following claims from short-seller Hindenberg. The electric vehicle company went public near the start of 2019, is down 72% from its peak share price at 79$ mid-year, trading at 22$ now.

You could have avoided losing money on Nikola shares. No, you don’t have to be an expert in Finance or an experienced short seller like Hindenberg. All it takes is some commonsense questioning a.k.a Due Diligence.

Questions that you could have asked:
1) No sales, no earnings, no production since the company was founded in 2014. Why buy Nikola when other EVs exist that produce something?

2) What is their value proposition? Electric vehicles? – Did you see even one Nikola vehicle on the road? Any road tests by third parties? (None). Hydrogen fuel cell technology? – How many cells produced till now? (Zero).

3) Future plans – how many promises did they deliver on? (None. The list runs too long to mention here). Refer to Sam Alexander’s video on Youtube called “Nikola Motors: False promises (2016 announcement to 2020)”.

4) Management Quality – Did you find Trevor Milton (CEO) credible? (Doesn’t seem to have a good track record). Did he hire the right people? He placed the future of the hydrogen cell technology in the hands of his brother, who is skilled in construction and concrete work. He hired the manager of a golf course as the head of infrastructure development. The work-ex of all these key people is available on Linkedin – just a click away.

5) General Motor’s 11% (2B$) Stake in Nikola – How clear was the benefit that would accrue to Nikola from this partnership? (Not very, it seemed to be a licensing agreement where the only real winner was General Motors).

Looks like the only Trevor you can trust is the one from GTA V.

Disclaimer: We did not and do not hold any position in Nikola shares.